“Five” (as in a shape) – Pentagon-Pentagram and the Golden Ratio 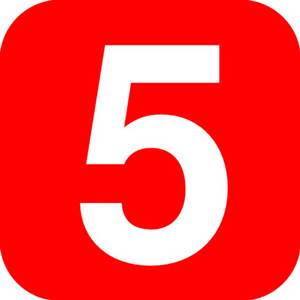 In this post we study “5” again – but with reference specifically to Graphs and Shapes, to which number 5 illustrate many interesting properties.

> Do you know complete graph? Mark any n points, then connect each pair of points, you will have a complete graph. Here is a graph with 4 points.

It’s not necessary to connect all points with straight lines: you can connect them with an arc or a curve – like in the figure shown in this paragraph. What do you note: no connecting line intersect with any other lines.

Such a graph is called a planar graph.

What about a complete graph with 5 points? We draw it as a pentagon plus a 5-star (also called pentagram). No matter how you try it, some two lines of all connecting lines must intersect somewhere. There is no way to avoid or escape from that.

Put it simple:
A complete graph with five points is not planar.
(if you want avoid crossing each other in connecting lines), you have to raise one point so that it does not share the same plane with the other four points.

> What’s so special about the shapes with golden ratio? It’s visually pleasing to the eye – shown by some experiments. Not only in triangles. In a rectangle, if the ratio of longer side to shorter side is 1.618 .. It also looks pleasing to a human eye.

> In the title we mentioned pentagon-pentagram. A regular pentagon is a polygon with 5 sides, with all the sides being equal and all the interior angles of this pentagon being equal. A pentagram is constructed by connecting straight lines between the vertices — usually being referred to as the (regular) five-star.

In the diagram of regular pentagon-pentagram, we can observe many of these golden ratios.

There are many many golden triangles.

Can you find some of them?
This is the first puzzle we have posted. can you find?

Let us end this post with a verse in Christmas’s popular song,

“In the fifth day of Christmas,
my true love gives me
FIVE GOLDEN RINGS .. .. ..

How about the five golden rings all of which contains the golden ratio?