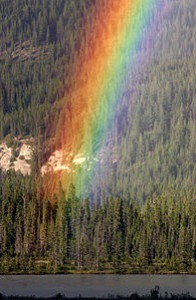 To be precise, rainbows span a continuous spectrum of colours. Any distinct bands perceived are an artefact of human colour vision. The most commonly cited and  remembered sequence of the rainbow is Newton’s sevenfold red, orange, yellow, green, blue, indigo and violet, 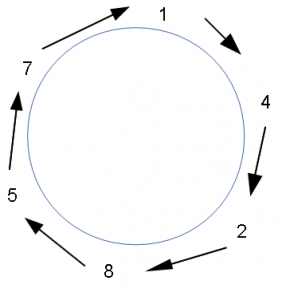 How many different numbers can we get? From 2 to 12: there are 11 numbers. If you do the experiment 110 times, in about 18 times you’ll get the sum “7”, but on average since there are 11 numbers, each number has about 10 chances. Now you see the significant difference.

In actual experiment, the results may vary as we always in experiment with random events.

The answer is that you need at least 7 circles.
Can you figure out how? And Can you show less (say 6) of smaller circles  are not enough to cover the large circle?

> 7 is a number in the Mersenne sequence, which goes as:

Of the Mersenne sequence, number 7 is the third number . Both 3 (from the 3rd) and 7 are primes.

It has been proven that if n is NOT a prime number, then 2n – 1 is not a prime either. How about the other side? If n is a prime number, does that guarantee that 2n – 1 is also a prime. This is a famous conjecture about the Mersenne primes; but today we know that it is not so. We refrain from discussing here, but that’s an interesting topic.

> Number 7 is also be considered as “mystic” or “magic” in both oriental and western cultures. In English, “7” sounds like “heaven”. Number “7” has been used many times in the bible, for example, the great flood lasted 7 weeks (7 x 7 days), and Egypt had 7 abundant years followed by 7 disastrous when all harvest and so bad, etc.
We have mentioned 7 wonders of the world . And have you heard the English phrase “at sixes and sevens”? It is a British phrase used to describe a state of confusion or disarray – – so not good — But whether good or bad, “7” is special.