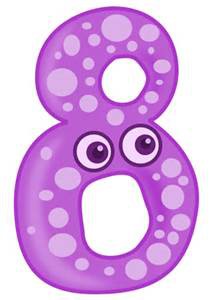 We can also say that 8 is a perfect power (as 8 is the cubic power of 2; any power, whether square, cubic, or fourth degree, etc, can be called a power).

Look at this identity equation:

8 is the ONLY power that is one less than another perfect power (other than the trivial case of 0 and 1). This is (proved) Mihailescu’s Theorem.

> An octagon has 8 sides; an octagon can be obtained through “splitting” each side of a square shape into two shorted sides.

An octahedron (3D shape) has 8 faces. You may call it a quadruple tetrahedron as you can split it into four tetrahedrons.

And an octopus has 8 legs.

> The octal numerical system is often used in computer science:

Information is stored in a computer using binary. Each binary is called a bit, and three bits form a 3-bits which is octal. For an example, the decimal number 20 is represented as 010100 in binary, and as 24 in octal.

An octahedron has 6 vertices, 8 faces and 12 edges.

and the number of edges is the same for a cube and for an octahedron.)

An octahedron is therefore the dual polyhedron for the cube (by swapping vertices and faces). Dual pair of polyhedrons is an interesting mathematical concept.

Every sphenic number has 8 exact divisors (include 1 and itself).

And naturally, if we exclude number 1 and the Sphenic number itself, then:

Every sphenic number has 6 exact proper divisors (not counting 1 and itself).

> How number 8 come to its current shape “8” in arabic number system is an interesting story. The following glyphs shows the evolution of 8.

One of the many possible explanations for the shape of 8 is as follows:

), it looks more like the English letter S (which starts the word “symmetry”). At the end (as written today), the glyph becomes closed completely (and symmetric, with several axis of symmetry).

— When you think of the symmetry, think about the figure “8” shape!
The “figure 8” shape often used in context of sports such as figure skating. We also see figure-eight turns of a rope or cable appearing in some drawings or digital icons.

Super 8, when you read the two words together （liason) without pause, it sounds like “super rate” therefore become business brands, meaning to provide super service with an affordable price.