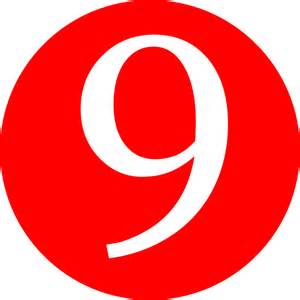 > In decimal system, to judge whether an integer is a multiple of 9, one add all the digits and find the sum. If the result of the sum is greater than 10, then from the results you add all the digits again. So finally we can get a digit that has only one place (less than 10). If this final one is 9, then the initial number would be a multiple of 9.

Mathematically speaking, for any multiple of 9, its digit root is 9.

> The “casting-out 9” method is a shortcut method for checking the results of integer operations, based on the principle we just discussed.

> Take 4 points from a circle, and choose to connect pairs of points to form chords. If a restriction is imposed so as not to allow intersection of chords, then there are exactly 9 ways to make the choice. As shown in the illustration below. 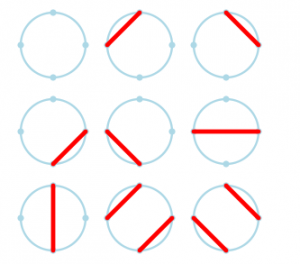 To recapitulate, for four points on a circle, there are 9 ways of making the chords through connecting some pairs of points (include no connection at all), when the restriction is not to allow intersection chords.

Since Motzkin (T. Motzkin – an Isralian mathematician) first worked on this problem, so named after him, number “9” is called a Motzkin number.

Take for example the identity 45 ÷ 9 = 5. Take 45 and strike out from it a digit 4, then what’s left is another digit 5. (Of course, this cannot be true for any number divided by 9.) What’s amazing in the above is, that the trick can be applied twice (for example, in 405 -> 45 -> 5); each time we strike off certain digit and the value of number is reduced to (1/9) of the value before the division operation. So let’s call this a 9-reducible chain of numbers.

Taken another close look. Can you find any other pattern in the above sequence?

> The Arabic digit has several different ways of writing (ancient writing, not in use today). Some looks like a question mark, some looks exactly like digit “3”, and for some others, digit 3 is contained inside; just like, as we know, 9 contains 3 as one factor.

The last of these continued to evolve into today’s number “9”.

> In English, we have “cloud line”, and in orient we also have “Nine Layers of Heaven). The meaning does not coincide completely, but the usage seems to be similar.

A. For 4 points on a circle, there are 9 ways of making the chords through connecting some pairs of points;

B. Each 9-reducible chain ends with a multiple of power of 5.

Random picked facts as they are, it seems number 9 appear universally at many places we’re not expecting!