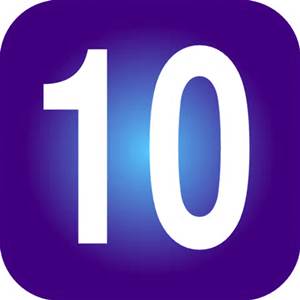 > 10 is the base of our decimal numeric system — it means 10 ones is ten, 10 tens is hundred, 10 hundreds is thousand, etc. We use decimal system on a daily basis.

> Digit “0” was invented in Oriental world but it took a long time to be accepted in the Western hemisphere. For number 10, people initially use a (blank) bar or a circle symbol as there’s nothing in units-place; then it has become a standard to use ‘0’ once ‘0’ emerged. Roman numerals, which did not embrace the idea of “place value”, were used until recent (where we use X, C etc for 10, 100, .. — there never has been there a zero in Roman numeral).

> 10 is a triangle number as well as a centric triangular number.

> If a number has exactly two prime divisors, then it is called a semi-prime. Number 10 is a semi-prime as

The first semi-prime is 6. Any semi-prime will have 4 divisors (including number 1 and itself).

> 10 can be represented as the sum-of-squares as below:

> Ancient Greeks has suggested to use the square root of 10 as an approximate value of π (where of a circle, π is the ratio of circumference to radius).

In early history, as a fast calculation mechanism, people resort to logarithms; of which the most commonly used was 10 (therefore base-10 logarithm obtained its name as the common logarithm).

> Considered that a number is raised to the 10th power.