> 17 and 19 are twin primes: twin primes are two consecutive odd numbers who are both primes.

Here are some classical results to which are linked two big names (both mathematicians) : Fermat (Pierre de Fermat) and Gauss (Carl Friedrich Gauss).

Carl Friedrich Gauss discovered that heptadecagon (17-sided polygon) is constructable using compass (for drawing circles) and ruler (for drawing lines) only. Any regular polygon with number of sides being a Fermat prime number can be such constructed (as Gauss gave the method of construction and the proof).

17 is everywhere – from Sudoku game to Irregularity Distribution

> (An Interesting Claim about a soduko game) Have you played a sudoku game? It is a puzzle of 9-by-9 (=81) cells, each cell supposed to be filled with a digit chosen from 1 to 9. Some entries of the 81 cells are given prior, then a player’s task is to fill remaining entries 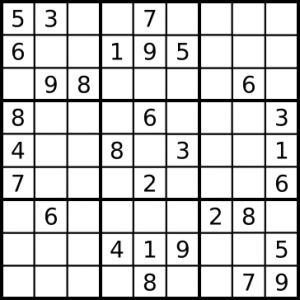 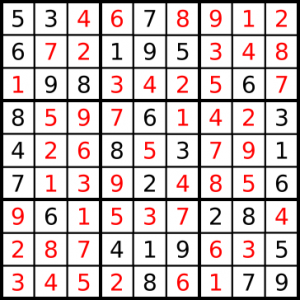 such that each row, each column, and each 3-by-3 smaller cell must contain digits from 1 to 9, each appearing exactly once.  If such conditions are all met, the fill-in is called a (proper) solution.

See above figures for a given sudoku game (with some fixed entries given) and one of solutions.

Regarding the game, there is a claim:

Let us see an example. If there is a 9-by-9 sudoku game where you see only 15 cells filled (with numbers from 1 to 9), then you must be able to work out two or more different solutions (or none at all).

> For the problem of Irregularity of (1/n)- distribution events, the solution exists for n<=17.

(Details are to be posted soon)

We conclude with a few trivia.

> (Sum of Squares and Cubes)

Among all that possess the feature (as a prime and can be written into such sums), 17 is the smallest.

In a psychology test, when asking to write down a random number between 1 and 20, most people chooses 17 – such got the name “the least random number”.

In countless albums, bands, movies and magazines, journals, you’ll find 17 as part of the title or name. As I did a search, several songs immediately pop up:

The reason is mysterious, but that age 17 as youth curiosity and restlessness may have played a role.

Reverse the procedure: from 2017 shuffle the digits we can get 1207 — we call that number morphing, and then we are to factor 1207 to 17 x 71.
Wow, That’s Seventeen. Apart from something deep (like Gauss’s results), we are here Just for Fun!

Three sounds pretty close to “tree”, there are lots of trees in a forest.
Have you heard the word “tripod”? Here “tri-” means three.

> The minimal property for number 3: a polygon has at least 3 sides, the smallest odd prime is 3. The first and the smallest triangle number is also 3 (number 3 = 1 + 2).

If not counting “1”, then number 3 is the smallest odd number.

Oddly enough, “3” also means “many” in some cultures.

> All integers are divided into 3 categories: positive integers, zero, and negative integers.

To test whether a number is divisible by 3 (has factor 3), it is enough to add all the digits of the number, and check weather the sum of digits has factor 3.

> The sum of any three consecutive integers is divisible by 3.

> The 3-4-5 triangle is the smallest right triangle with all three integer side lengths.

This fact is also interesting: if a right triangle has three sides of integer lengths, then at least one side length is a multiple of 3.

Whether you like it or not, number “2” is fairly important in math.

> Any number that can be divisible by 2 (has a factor of 2) is called an even number. Otherwise it is an odd number.

> 2 is the smallest prime number. (A prime number is a natural number that cannot be written as the product of even smaller numbers).

> Look at the identity.

Conclusion: we meet number “2” quite often in both arithmetic and algebra.

> The numbers in power of 2, when written in decimal system (the usual system) are:

> Look at this equation on the sum:

> (Algebric) Squares are the powers when the exponent is 2. We calculate the area of a square shape by squaring side of that shape.

From Pythagorean Theorem: in a right triangle, the sum of squares of the two sides equals the square of the length of hypotenuse.

> The binomial power (a+b)n is studied in early classic algebra and is a classic topic in high school algebra. (We do not have 2 here, however, a and b are two items).

Expansion this into polynomial, one tool is Pascal triangles. [This entry is a bit deeper.]

> When thinking of “two”, think of being in pairs, and think of even and odd!